The Non-Equilibrium Soft Matter group employs a combination of analytical and numerical methodologies to study the structural, dynamical, and mechanical properties of materials that are inherently out of equilibrium. 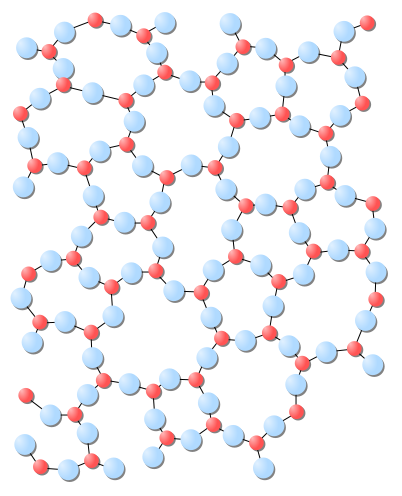 Virtually all liquids can undergo a transition toward a glassy (i.e. amorphous solid) phase when cooled to below their melting temperature. Remarkably, while this phenomenon has been experimentally known for centuries and is exploited in a wealth of applications, understanding the physics behind the glass transition still stands out as “the deepest and most interesting unsolved problem in solid state theory”. We employ a combination of novel first-principles theory, computer simulations, and machine-learning algorithms to eludicate the physics of glass formation—both for model systems and more application-oriented functional glass formers such as vitrimers.

Active materials are composed of particles that can convert energy into autonomous motion. This renders them intrinsically far from equilibrium, resulting in rich dynamical and self-organizing behavior that defies the laws of conventional equilibrium statistical mechanics. Examples in nature are abundant and occur on all length scales, ranging from the cellular cytoskeleton to macroscopic bird flocking. Artificially created active particles have also recently become available, offering potential applications in bio-sensing and targeted drug delivery. We employ theory and particle-resolved computer simulations to study the emergent behavior of such active materials. In current research we explore the role of geometric and topological constraints, pattern formation in inhomogeneous fields, and aging and rejuvenation behavior in active (glassy) matter. 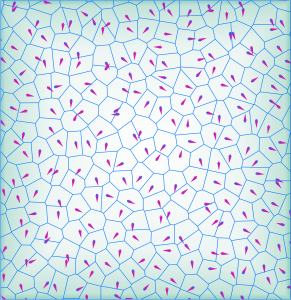 iving cell represents a magnificent example of responsive, smart, and programmable matter, combining the ability to sense changes in its environment with the means to adapt in a quick and effective manner. We seek to study and ultimately harness the physical principles underlying this responsive behavior to design and control novel bio-inspired and smart materials. We are mainly interested in systems that exploit properties of both glassy and active matter, such as densely packed cell layers, active disordered (bio-)networks, and actively doped glasses.

Theme by Anders Noren — Up ↑